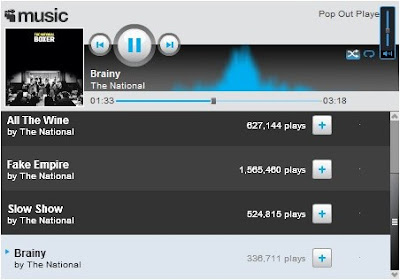 Originally a major competitor to Facebook, MySpace has evolved from a being a place for 'friendships' to an important site in digital music. Like Facebook, artists can create profile pages for fans to follow but artists can also embed songs into a music player for fans to listen to. This functionality has really opened the door for discovering new music (especially for new artists who don't have a label or a means of distribution and marketing). However, MySpace's music player (above) suffers from some usability issues including small controls and an inefficient screen layout.
When advancing through a song, users have to move a very small slider control that requires unnecessary precision. An improved, larger control would be much easier to click and drag than the current small rectangle shape. Also, the two-row layout of songs in the artist's queue is inefficiently designed. A maximum of only five songs can be listed in the queue at one time and then users have to scroll to see more. Compressing the layout of the queue slightly (suggested wireframe below) by using a one-row design would maintain the song information (song name, artist name, # of plays) and '+' control while displaying more songs and improving the user experience of the player. 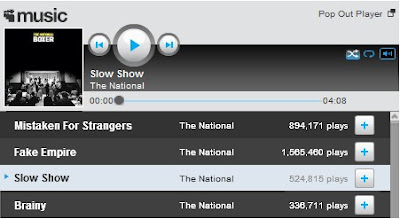 trendingfm said…
This information is meaningful and magnificent which you have shared here about the free music player. I am impressed by the details that you have shared in this post and It reveals how nicely you understand this subject. I would like to thanks for sharing this article here.
October 11, 2019 at 10:27 PM

Laura Bush said…
Well you have shared information about music stock. as we also provide Music Trading Sites Sweden at affordable prices. for more info visit our website.
March 28, 2020 at 12:50 AM

Maxx TV said…
Pretty good post. I just stumbled upon your blog and wanted to say that I have really enjoyed reading your blog posts. I hope you post again soon. Big thanks for the useful info. Tamil channels

Audio Mixing Mastering said…
Amazing, thank you for this post. such a nice piece of article. Very good explanation. Thank you for sharing your knowledge.