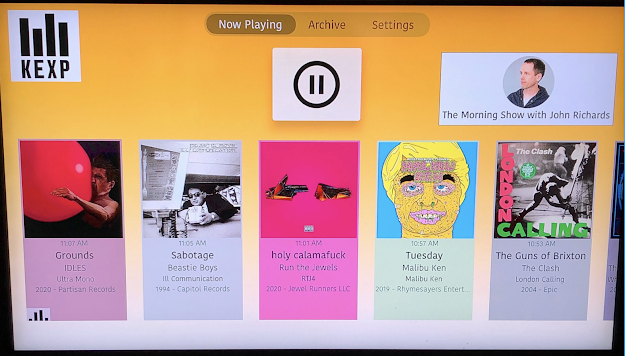 I love KEXP. It’s a listener-supported radio station in Seattle. It streams all around the world on its website and mobile app. And they’ve had a really good app for the Apple TV for some time - great to stream in the house at a high volume!

And I’ve reviewed them before here. Oh, and also here.

They recently released an excellent new version of the app for Apple TV. And although it doesn’t introduce a lot of new features, it’s way more visually engaging and maximizes the screen real estate much better than before.
Here are some of the major changes...
Other features on the website or mobile app I’d love to see added in the future include:

This Is My Jam - a well-designed, responsive web application

June 27, 2015
This Is My Jam is a music app that lets users share one song at a time with others. If there’s a song that you absolutely love right now and want to the world to know about it (which I often do), you can select the song, post it to your page and tell the world ‘this is my jam!’. Not only is the app’s value unique but the user experience is good, specifically when it comes to choosing a new jam.  First of all, the app is responsive, slightly changing the layout of screens according to users’ device sizes. This is important because it delivers a consistent experience from web to mobile (without having to learn or download a separate native app) while the folks at This Is My Jam only have to maintain one web experience that adapts to users’ devices (that is, they don’t have to manage a web AND native mobile experience and all it entails).  And this isn’t just some responsive web site where the content shifts around - this is a web application, folks, and it’s not easy to do. W
3 comments
Read more