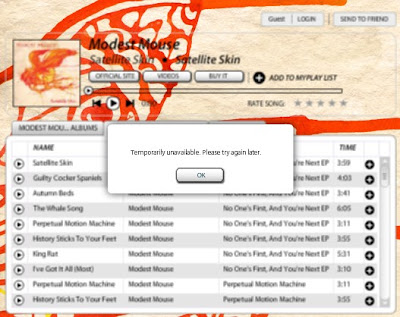 Modest Mouse has a new collection of B-sides from their past two releases (Good News for People Who Love Bad News and We Were Dead Before the Ship Even Sank). On their web site, you can listen to the tracks by clicking a very prominent 'Launch Player' link on the top of the homepage.
When I first used the Player, I had trouble accessing the songs but was quickly presented a popup indicating that the service was temporarily unavailable. What I liked is that when the popup opened, everything else in the window (behind the popup) became blurry. This method of focusing the user's attention on one window, though not revolutionary (it's used on both the Mac and Windows OS), is helpful and takes the cognitive burden off users.

October 31, 2017
A couple of weeks ago, I wanted to buy an inexpensive stand for my acoustic guitar. I was already familiar with Reverb, which is an online marketplace to buy and sell music gear. Without knowing much at all about guitar stands, I did a search, landed on their site, and within several minutes I was able to research and purchase a new stand. From the helpful information about different stands to the last step of the checkout process, the user experience was great.

After Googling 'guitar stand Reverb', one of the first results was a super helpful article on Reverb titled, 'The 6 Best Guitar Stands for Every Budget'. It listed all with all of the comparative specs I needed right on the page (saved me from having to look at each stand's page). Knowing my budget was small, I selected the On-Stage XCG4 Classic Guitar Stand. The price was right, the design was simple, and reviews were good. There's only one I caught that could be improved - when I curiously tried a sim…
2 comments
Read more

April 24, 2018
A few weeks ago, my wife and I really wanted to see Alvvays and Frankie Rose at Metro in Chicago. But the show sold out and I was left to look for tickets second-hand. I've used Stubhub before to purchase concert tickets but up until now, hadn't tried their Price Alert feature which lets you set a ticket price max and be notified when the price goes below it. The user experience from beginning to end was really good. The feature is easy to find and provides very mobile-friendly controls to create the alert.

The Price Alert tab was prominent on the event details screen - very easy to find. Note: today (1/5/18), Stubhub has removed those tabs and you have to tap an Info button top right of the viewport to look for the same feature. It's a still a good UX once you get there but it's an additional step.

The Price Alert feature is intuitive and uses tappable numbers to let me pick the quantity of tickets (not a clunky dropdown menu or less efficient plus/minus pattern). And…
Post a Comment
Read more

An arpeggiator made with SVG!

September 28, 2017
Before attending the An Event Apart 2017 conference in Chicago last month, I didn't know much at all about SVGs, or even what an arpeggiator was. One of the speakers, Chris Coyier, gave a fascinating talk about the possibilities of the vector image format. And some of the examples he used included things like logo animation, shape morphing, spinners, art.

He even had a music example - an arpeggiator created on CodePen by Jake Albaugh.

If you're interested, there's a great article about arpeggiators here. In short, an arpeggiator is commonly found on a synthesizer, and 'provides synth players with an easy way of playing complex synth parts via simple chords'.

Besides being built entirely with SVG, Albaugh's arpeggiator (which you can interact with) has a good user experience too.
Areas of the screen are clearly labeled and the bright yellow color stands out for selected items, The screen is laid out well - you select options in each section and finally simulate …
1 comment
Read more