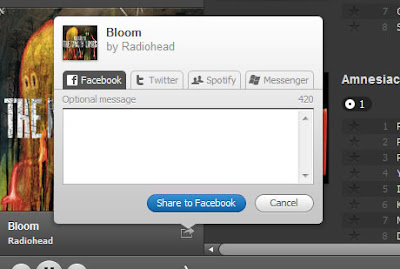 Spotify was recently launched to the US audience after (literally) years of waiting. The UI is great and hasn't changed much since I reviewed it a while back. In short, it's clean, efficient and easy to use building on the familiar look of iTunes and other on-demand apps. One thing i had not looked at until now is Spotify's social component. A major aspect of most music apps, they've done a really good job with its user experience for several reasons:

1. Quick access to your connections in a persistent People panel on the right side from which you can access their playlists (the location makes your friends feel more integrated than in other apps like Pandora, although that may change when the new Pandora UI is released),

2. Ability to efficiently share via several social media from the same modal dialog - the usual suspects Facebook and Twitter are here but also IM and Spofity, of course,

3. Bright blue color to distinguish the primary action buttons (Share, Send Track) from secondary button (your eye is drawn to the main call to action)

4. Use of autocomplete (i.e. predictive text) when typing in the To: field to add connections quickly and

5. Flexibility to share from several areas of the interface including the album art or the song list

I haven't really used social media in music apps until now. Spotify has made it easy and fun to share my music (including the King of Limbs!) with my friends. I may even upgrade to the paid version soon.