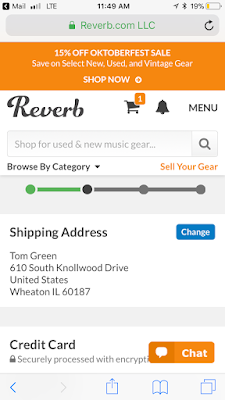 A couple of weeks ago, I wanted to buy an inexpensive stand for my acoustic guitar. I was already familiar with Reverb, which is an online marketplace to buy and sell music gear. Without knowing much at all about guitar stands, I did a search, landed on their site, and within several minutes I was able to research and purchase a new stand. From the helpful information about different stands to the last step of the checkout process, the user experience was great.

After Googling 'guitar stand Reverb', one of the first results was a super helpful article on Reverb titled, 'The 6 Best Guitar Stands for Every Budget'. It listed all with all of the comparative specs I needed right on the page (saved me from having to look at each stand's page). Knowing my budget was small, I selected the On-Stage XCG4 Classic Guitar Stand. The price was right, the design was simple, and reviews were good. There's only one I caught that could be improved - when I curiously tried a similar search for 'guitar stand' directly on Reverb, the same article was nowhere to be found. So users relying only on Reverb's search may miss important resources like this unless they do a lot of digging (I ended up finding it but it was difficult).

Meanwhile, after adding the stand to my cart, the rest of the process was intuitive. Tap-friendly, bright colored buttons (Add to Cart, Proceed to Checkout) provided effective calls to action. The language used was casual and conversational (How would you like to pay?), and I was aware of how much work remained in the checkout process by way of a step indicator at the top of the UI.

Laura bush said…
It is actually a great and helpful piece of information. we provide Buy Music Royalty Rights Online at affordable prices. for more info visit our website.
September 15, 2020 at 4:09 PM

This Is My Jam - a well-designed, responsive web application

June 27, 2015
This Is My Jam is a music app that lets users share one song at a time with others. If there’s a song that you absolutely love right now and want to the world to know about it (which I often do), you can select the song, post it to your page and tell the world ‘this is my jam!’. Not only is the app’s value unique but the user experience is good, specifically when it comes to choosing a new jam.  First of all, the app is responsive, slightly changing the layout of screens according to users’ device sizes. This is important because it delivers a consistent experience from web to mobile (without having to learn or download a separate native app) while the folks at This Is My Jam only have to maintain one web experience that adapts to users’ devices (that is, they don’t have to manage a web AND native mobile experience and all it entails).  And this isn’t just some responsive web site where the content shifts around - this is a web application, folks, and it’s not easy to do. W
3 comments
Read more

August 07, 2009
I don't make many predictions but I really think that Spotify will change music. Developed by a group of folks from Sweden, it is a P2P streaming music application with a library of some 6 million songs that you can listen to whenever you have the app running (desktop or mobile). With minimal advertising in the free version, think of it as Hulu for music. Later this year, it will be availble to users in the US (licensing issues) including an iPhone app which could really affect the whole notion of paying for music downloads. Why is it so good? Well, you can listen to whatever you want, create playlists and even cache songs to listen to while you're not connected, but most importantly, the UI is clean and easy to use making the user experience great. Spotify has a good visual layout; screen density is low and navigation is inituitive and flexible helping users find music quickly . On the left side, for example, the Search box, recently saved searches and the album cover l
3 comments
Read more